While not frequently used in today’s world, I believe Morse code is a nice “old” skill to know for survival purpose or to be employed as an assistive technology. Please read about it below.

‘Morse code’ is a type of character encoding that transmits telegraphic information using rhythm. Morse code uses a standardized sequences of short and long elements to represent the letters, numerals, punctuation and special characters of a given message. The short and long elements can be formed by sounds, marks, or pulses, in on off keying and are commonly known as “dots” and “dashes” or “dits” and “dahs”. The speed of telecommunication transmission is often measured in baud. However, in the case of Morse code, it is measured as WPM speed. 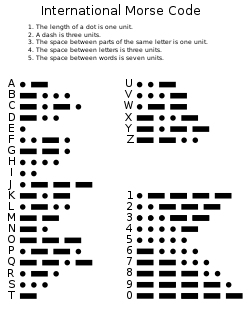 Click here for the full article at Scouting Resources